Sensible Policies for a Happier Hobbyist 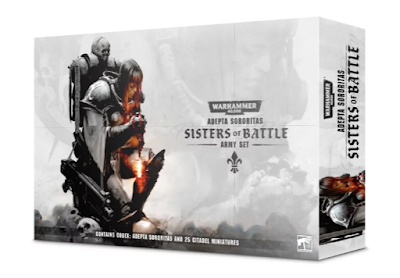 I was lucky enough to nab a pre-order for the Sisters Of Battle army deal before the GW website collapsed under the weight of demand. It is a thing of beauty, I am not going to lie. I have been waiting for this army for so long and now its arrived I feel a real desire to do these models justice.

This, of course, means painting the things.

Now, like many a hobbyist I have a backlog of epic proportions. Nearly two decades of wargaming has left me with a rather large cupboard filled with sprues; unpainted and half-painted models; and, eBay bargains eagerly awaiting the acid bath treatment. I am terrible for flitting between projects and abandoning things halfway through.

So here's the idea: until I finish the Army Deal models I don't buy any new models.

Now, I know how my brain works and I thoroughly intend to paint other models in this time since that means I won't get bored (probably) and some small fraction of the backlog will be addressed. Once the Army Deal models are done and I buy another box set then the process starts over again: no new models until that box is painted up.

As I write this I have the Canoness and the Battle Sister Squad built with the Leadbelcher spray standing by. As you've probably guessed from that basecoat tease I'll be painting them as the Order Of The Argent Shroud. I'm not bowled over by their faction rules, if I'm perfectly honest, but the shining silver armour looks both amazing and relatively easy to achieve.

(That having been said I have only flicked through the Codex so I might be completely off-base about the faction benefits.)

Posted by James Ashelford at 07:00

James Ashelford
This is my blog, incoherent and rambling as it might be.